In Search of Luminance 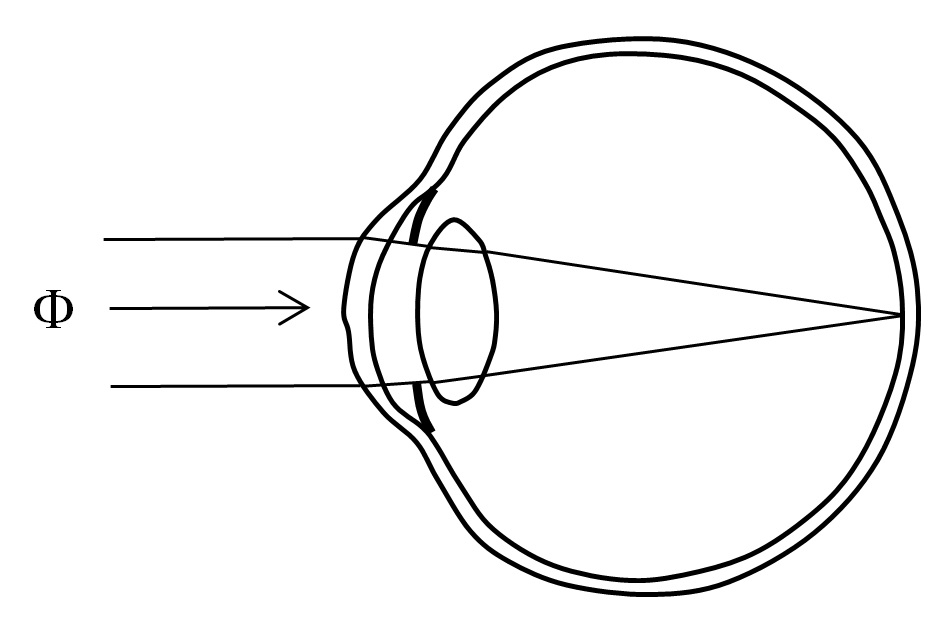 The IES Lighting Handbook, Tenth Edition (IES 2010), describes luminance as “perhaps the most important quantity in lighting design and illuminating engineering.” This is an accurate but curious description, as the editors neglected to include an entry for Section 5.7.3, Luminance, in the handbook’s index.

The section itself is a mere five paragraphs long, informing the curious reader that luminance is the “local surface density of light emitting power in a particular direction,” defined mathematically as:

which for most readers will be completely and absolutely … opaque.

This is unfortunate, as luminance is undeniably the most important quantity, and indeed the most fundamental concept, in lighting design and illuminating engineering. More than a mathematical definition, professional lighting designers need to understand what it is that we see.

To understand luminance, we begin with a parallel beam of light. Ignore any thoughts of surfaces or light sources; just imagine a beam of light traveling through empty space in a given direction. Imagine also that this beam has a finite width; say, a rectangular beam one meter on a side.

Now, what happens if the beam illuminates a real or imaginary surface at an angle? We have this:

This is nothing more than Lambert’s Cosine Law (Lambert 1760):

This is basic high school algebra! Ignore the symbols and concentrate on the underlying physical concept.

We can further imagine the beam not as a parallel beam that is infinitesimally narrow, but as an elemental cone whose infinitesimal solid angle we designate as dω. (See the previous article Solid Angles for an explanation of this concept.)

With this, we have the conceptual framework to understand the formal definition of luminance:

where the factor d2Φ does not mean that the symbol d is being squared. Rather, it simply means that the luminous flux dΦ is being divided by the solid angle of the elemental cone dω and the area dA. Further, the parameter ψ indicates that the luminance may also vary when the beam is rotated horizontally by angle ψ around the surface normal n.

What this equation is saying is that the luminance L of the surface dA is equal to the amount of luminous flux Φ (lumens) leaving dA in the direction θ and contained within the elemental cone (i.e., parallel beam) dω. This is equivalent to the IES Lighting Handbook description of “local surface density of light emitting power in a particular direction.”

There is an important but underappreciated corollary to this definition of luminance. Recalling that the surface can be real or imaginary, we can imagine placing an imaginary surface that is perpendicular to the beam direction (i.e., θ is equal to zero) anywhere along its length. What this means is that the luminance of a parallel beam of light is constant along its length. In other words, luminance is not an intrinsic property of the surface, but of the beam itself. (As an example, the sky has a measurable luminance when viewed from the ground, but it has no real surface.)

Dispensing with the mathematics, we can therefore say:

Luminance is the amount of luminous flux per unit area as measured in a parallel beam of light in a given direction.

Photometry is traditionally taught using the concept that luminance is a property of real or imaginary surfaces. The problem with this approach is that you cannot easily explain why participating media such as the atmosphere, smoke, fog, colloidal suspensions in water, and so forth have measurable luminance. Thinking of luminance as a property of a beam of light rather than of surfaces eliminates this difficulty.

How do we perceive luminance? Imagine that you are looking at a blank sheet of matte white paper. Being an approximately ideal diffuser (except at very oblique angles), this paper will scatter incident light equally in all directions.

Now, imagine that each point of the paper’s surface is a point source of light. In accordance with the inverse square law, the luminous flux density of this light will decrease with the square of the distance from the point source. That is:

where I is the intensity of the point source, d is the distance from the source, and E is the illuminance of a surface (such as the cornea of your eye) at that distance … so why do we see and measure the luminance of the paper as being constant with distance?

To answer this, we need to look at the eye itself, which basically consists of a lens that focuses images onto the cones and rods of the retina. Each cone and rod has a finite width, and so it receives light from a finite area of the surface of the paper.

But wait! This area of the paper is dependent on the distance of the paper from the eye. Moreover, it is proportional to the square of the distance … which exactly cancels out the inverse square law for a single point source. Therefore, we perceive the luminance of a finite area surface as being constant regardless of its distance from the eye.

There is a counterexample that emphasizes this point: the night sky. Even though the actual diameter of a star may be a million miles or so, it is so far away that we perceive its light as a parallel beam that is focused onto a single rod or cone of our retina. The luminance of this beam is constant, and so we see the star as having a specific perceived brightness (or visual magnitude). The inverse square law still applies to the starís emitted light, however ñ it is after all a point source ñ and so its magnitude depends on its distance from the Earth. All other things being equal, more distant stars are inherently fainter.

How the eye sees a parallel beam of light, however, is the key point: wherever we look, we see luminance. We do not see luminous intensity or illuminance; we see the luminance of beams of light. Luminance really is the fundamental concept of lighting design.

A famous 20th-century physicist (whose name I regrettably cannot recall, even with Google’s assistance) once observed that until you can visualize a problem, you cannot truly understand the mathematics that describe it. He was likely referring to quantum mechanics, which nobody yet fully understands, but the observation still applies. In particular, knowing the mathematical definition of luminance is not enough; we must understand the concept of luminance. With this understanding, we can better understand its importance to lighting design and illumination engineering.