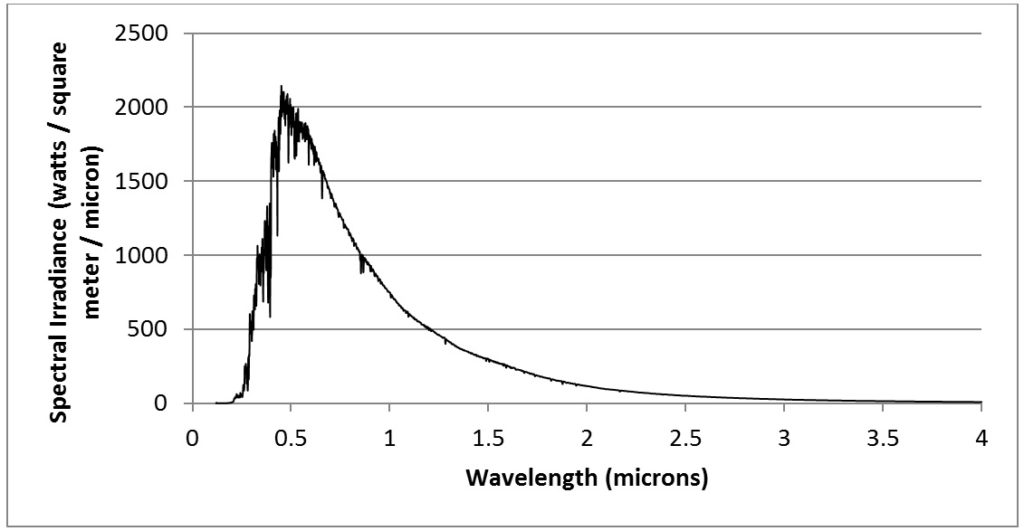 Lighting design is based in part on the reasonable assumption that photometric units have precise definitions. The candela, for example, has a precise mathematical definition:

“The candela is the luminous intensity, in a given direction, of a source that emits monochromatic radiation of frequency 540×1012 hertz and that has a radiant intensity in that direction of 1/683 watt per steradian.”

and from this all other photometric units are derived, including luminous flux, luminous intensity, luminance, illuminance, and so forth.

You might expect then that the same applies for daylighting design … but you would be wrong.

We begin with the solar constant, which is defined as the solar irradiance (measured in radiant watts per square meter) incident on a plane perpendicular to the Sun at a distance of one astronomical unit (AU), which is roughly the mean distance from the Sun to the Earth.

Defining the solar constant is easy; measuring it is not. Although it was first roughly measured in 1838, accurate measurements must be performed using a satellite above the Earthís atmosphere. You then have to correct for the distance of the Earth from the Sun, which varies due to the ellipticity of the Earthís orbit. (The actual direct solar irradiance at the top of the atmosphere varies by some 6.9% over the course of a year.)

The technology of precision spectroradiometers has of course improved over the years, and with it increasingly precise measurements of the solar spectrum and the solar constant. By 1993, satellite measurements had a precision of 0.01 percent (Kittler and Darula 1996).

Integrated over the entire solar spectrum, the solar constant is 1366.1 ± 0.58 watts per square meter. This is of course something of a fiction, as the total radiation output of the Sun varies by approximately 0.1 percent due to the 11-year sunspot cycle and other longer-term effects. In general however, the output has varied by less than 0.2 percent over the past two millennia.

The solar constant is useful for things like satellite design and climate studies. For lighting design purposes, however, only visible light in the range of 380 nm to 780 nm is important. By multiplying each wavelength by the CIE 1931 luminous efficiency function V(λ), according to:

the solar illumination constant can be calculated.

There is nothing controversial here … right?

The lighting design and simulation program Radiance has long been a standard tool within the daylighting research community. The name “program” is a bit of a misnomer, as Radiance is a set of hundreds of Unix-based utility programs that are executed via command-line scripts. One of these programs is gendaylit. This is an essential tool for daylighting research, as it calculates the absolute sky luminance distribution in accordance with the Perez sky model (Perez et al. 1993).

The issue is that gendaylit was written in 1994. At that time, the standard solar spectrum was Wehrli (1985), which resulted in a solar constant of 1367 watts per square meter and a solar illumination constant of 127.5 kilolux. These values were hard-coded as constants in gendaylit.

When the IES Lighting Handbook, Tenth Edition, was being prepared, the solar illumination constant was recalculated based on ASTM E-490-00a(2006). This document was first published in 2000, and has since been reapproved and published as ASTM E490-00a(2014).

This is not exactly an academic question, as the difference is 4.4 percent. This difference permeates all absolute daylighting values calculated using the Perez sky model. For annual daylight metric calculations such as spatial Daylight Autonomy (sDA) and Annual Sunlight Exposure (ASE), this difference can be significant (IES 2012).

It is an open question.