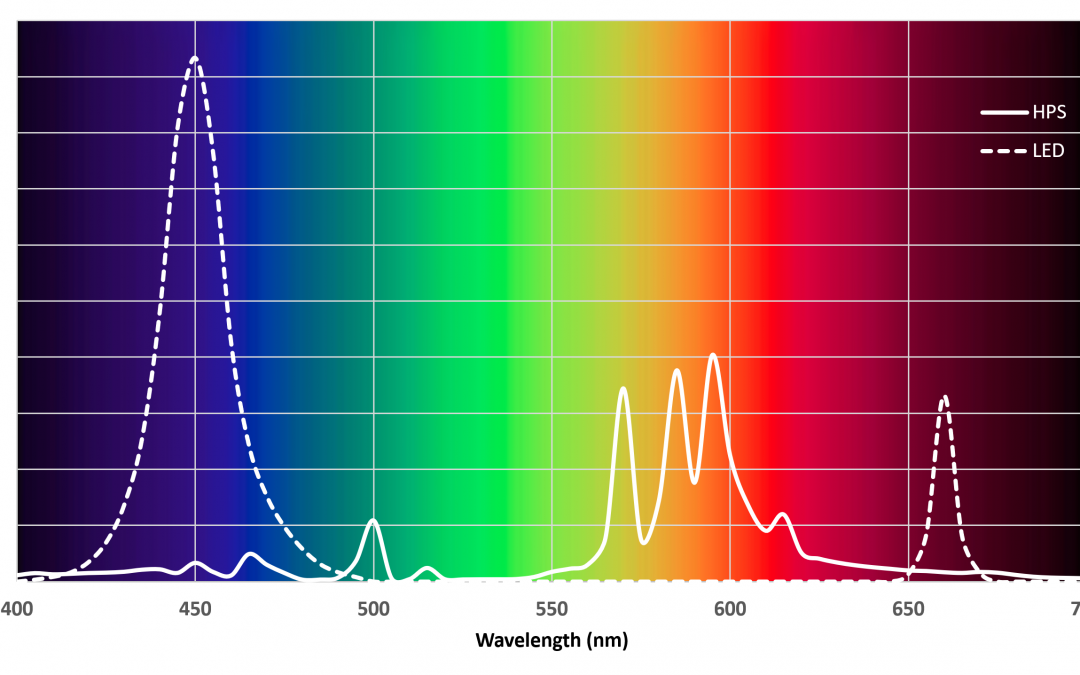 Supplemental electric lighting for greenhouses may be essential for extending the growing season in northern climates, but it comes with a not-so-hidden cost: environmental light pollution. The consequences of this pollution may range from irate neighbours in rural areas to municipal bylaws that may prohibit the use of supplemental lighting during certain hours of the night or altogether.

Searching for information on light pollution online will yield plenty of results. However, it soon becomes apparent that it does not apply to greenhouse lighting. Most of the discussion concerns astronomical light pollution, which is of interest to both amateur and professional astronomers, and where the focus is on outdoor lighting for roadways and parking lots. There are also discussions of “light trespass” onto residential properties from adjacent street lighting, which is rarely a concern for commercial greenhouses.

In addition, there are discussions of the effects of “artificial light at night” (ALAN) on nocturnal wildlife, including insects, fish, amphibians, and mammals. This is a complicated topic, as the effects differ between species and genera. There is almost nothing, however, that is specific to supplemental lighting for commercial greenhouses.

This can be a problem, particularly if citizen action committees lobby government agencies for bylaws and regulations. While alleviating light pollution is a laudable goal, it is necessary for all sides – concerned citizens, municipal authorities, and commercial greenhouse operators – to know the facts and discuss the matter accordingly. Beyond this, there needs to be agreement on what can reasonably be done to alleviate any problems.

At present, the primary source of information for citizen groups are publications from the International Dark-Sky Association (www.darksky.org) in North America and allied organizations in Europe (e.g., www.savethenight.eu). In Canada, the Royal Astronomical Society of Canada has its Light Pollution Abatement Program (www.rasc.ca/lpa) with similar goals. The goal of this article is therefore to look at light pollution in the context of greenhouse supplemental lighting.

Concerns over light pollution began in the 1950s, when the light from large cities began to interfere with astronomical observations made from nearby observatories. (The Dominion Astrophysical Observatory, for example, is only 10 km away from downtown Victoria, BC.) A combination of urban and suburban growth, coupled with the changes from incandescent street lamps to more efficient (and much brighter) mercury vapour and later high-pressure sodium (HPS) lamps, continually exacerbated the problem.

The problem is that even on a clear night, light emitted by roadway and parking lot light fixtures (aka “luminaires”) is reflected from the ground into the night sky. While most of this light escapes into outer space (as we can clearly see when flying over cities at night), a small but significant portion is backscattered down towards the ground by air molecules and airborne dust and smog. The resultant “sky glow” obscures our view of the fainter stars (particularly the iconic Milky Way), and of course interferes with observations by both professional and amateur astronomers.

By itself, a single roadway luminaire does not contribute significantly to sky glow; it is the cumulative effect of thousands to tens of thousands of luminaires in a city that is the problem. Large commercial operations, however, may have thousands of horticultural luminaires and so be equivalent to a small city in terms of light pollution. (Hybrid greenhouses for cannabis production, for example, may have as many as eight hundred 1,000-watt HPS luminaires per acre.)

In rural areas away from city smog, the relative amount of backscattered light from roadway luminaires is dependent on the spectral power distribution (or more colloquially, “spectrum”) of the light source. In particular, air molecules (primary nitrogen and oxygen) scatter blue light more effectively than red light (which is why the sky appears blue to us).

Figure 1 shows the spectra of typical high-pressure sodium (HPS) and light-emitting diode (LED) lights used for greenhouse supplemental lighting. The HPS luminaires look yellow-orange to us, while the LED luminaires appear, depending on the ratio of red to blue light (between 1:1 for vegetative growth to 6:1 for reproductive growth), as various shades of purple (or “blurple”). Figure 1 assumes a 1:1 ratio, which is the worst-case scenario for light pollution. The spectra have been scaled such that both light sources produce equal amounts of photosynthetically active radiation (PAR).

Following IDA and similar publications on astronomical light pollution, concerned citizens and municipal engineers may say something like this: “The amount of backscatter increases as the fourth power of the inverse of wavelength. The blue light of horticultural LEDs will produce much more light pollution than HPS!” This is correct, but it does not explain the situation very well. Figure 2 illustrates what this mean: the amount of backscattered blue LED light is roughly twice that of the backscattered HPS light.

This however does not tell the full story. When our eyes are fully dark-adapted on a starry night, we are most sensitive to blue-green light (actually 505 nm) and less sensitive to yellow and blue. When we take this into account, the increase in astronomical light pollution when changing from HPS to 1:1 blue-red LED lighting is a walloping 3.8 times.

Less often talked about but perhaps even more important are the effects of electric lighting on animal and plant life. It is impossible to cover all of these effects here, in part because ecological light pollution is the subject of intense ongoing research by biologists and ecologists. Rodents such as mice are most sensitive to green light and ultraviolet radiation, some migratory birds and bats are most affected by green light, insects respond to ultraviolet radiation, and plants can be impacted by red and far-red light, which disrupts their growth and development. Mammals, reptiles, amphibians, birds, insects … perhaps the best that can be said is that any excess light at night can be considered ecological light pollution, regardless of its spectrum.

While little research has been devoted to the topic to date, there is also the question of whether light pollution from greenhouses (FIG. 3 and FIG. 4) adversely impact birds, bats, and insects. In urban areas, tens of million migratory birds die every year from nighttime collisions with office tower windows. The US Fish and Wildlife Service is more specific – an estimated 6.6 million migratory birds die each year from collisions with communication towers and their warning lights. While migratory animals may not die from collisions with greenhouses, they are likely disoriented by the bright lights and may suffer increased mortality rates due to exhaustion.

Concerned citizens may lobby their municipal councils to “take back the night” so that their children can experience the starry nights they may remember as children, but little attention is paid to overcast nights, when the light pollution can be much worse.

On a clear night, the amount of backscattered light is miniscule – we only notice it because the night sky without light pollution can be exceedingly dark. Low-level stratus clouds, in the other hand, can reflect up to 75 percent of the light reflected from the ground.

For greenhouses, it all depends on the cloud ceiling height (FIG. 4). If it is 2,000 meters, any light from the greenhouse facility reflected from the clouds will be spread over an area of perhaps ten square kilometers and be reasonably unobtrusive. However, if the ceiling height is 250 meters, the area within a radius about 1500 meters will receive up to 60 times the amount of light pollution on the ground. If the greenhouses are near a sensitive ecological area, this can be a problem.

The amount of light pollution on the ground also depends on the average ground reflectance. For most of the year, this is between 5 and 10 percent. During the winter months with snow on the ground, however, it can increase to anywhere from 40 to 90 percent. Figure 5 shows the differences for summer (solid lines) and winter (dashed lines) ground conditions assuming 10 percent and 80 percent ground reflectance respectively.

The visibility of light reflected from the clouds is another matter entirely, as this depends on the cloud opacity and whether the clouds can be seen on the horizon on an otherwise clear night. Brightly illuminated clouds may disorient migratory animals, again possibly increasing mortality rates due to exhaustion. They may also lad to complaints from residents living a considerable distance from the greenhouses.

The simplest solution for most light pollution situations is to use the minimum amount of light needed, and turn the luminaires on only when needed. Unfortunately, this is rarely practical for greenhouse operations. Each crop has specific PAR and daily light integral (DLI) requirements. In response to the suggestion that fewer luminaires could be used or the luminaires turned on for fewer hours at night, each crop has specific requirements related to its circadian rhythms. Like animals, plants need to sleep at night. There may be some flexibility in the supplemental lighting schedule, but likely not enough to make a difference.

What will make a difference are blackout curtains on both the walls and roof of the greenhouse that can be closed at night. The name “blackout” notwithstanding, the preferred color facing inwards is white. In a large greenhouse where the floor area is much greater than the wall area, most of the light from the luminaires will be reflected from the plant canopy and ground through the roof panels. If the average floor reflectance is 10 percent and the curtain reflectance is 80 percent, the plant canopy will receive an additional 20 percent of light.

If a white polyethylene ground cover is used for the greenhouse floor, the average floor reflectance (assuming walkways between the plants) will likely be in the range of 40 to 50 percent. The light will in this case bounce back and forth between the floor and ceiling at least ten times before it is essentially absorbed by the plants, curtains, and floor cover. Each bounce provides further PAR for the plant canopy, so that the end result may be over 100 percent of additional light.

Whatever the amount of additional light received by the plant canopy, it is quite literally recycled light. It reduces the need for supplemental lighting, and can be seen as an operating cost offset to the capital and operating cost of the blackout curtains (which can also function as energy curtains in cold climates).

It is also worth noting that this recycled light is diffuse, and is directed at the plant leaves from both above and below. For many greenhouse crops, this can be beneficial, resulting in stronger stems and less leaf senescence.

In communities with large concentrations of greenhouses, such as Leamington, ON, light pollution is receiving increasing scrutiny from the press. You know you have a problem when the Detroit Press runs a major article on the light pollution from greenhouses located 25 miles away from the city.

LTO Nederland, the Dutch greenhouse industry organization, has been proactive in mandating screening for 98 percent of the greenhouse if lighting is being used during nighttime hours. If the light levels are greater than 15,000 lux during the hours of 5:00 PM to midnight, the screens need to block 98 percent of the light during the entire night, with the side screens blocking a minimum of 95 percent during nighttime hours.

If greenhouse operators wait until their municipalities begin discussing regulations and bylaws, it may put them at a considerable disadvantage. With so little information available to municipal engineers and planners to formulate proposed regulations, it may be advisable to be proactive.

There is no question that supplemental electric lighting in greenhouses can cause significant environmental light pollution. Having facts and figures available when discussing the issue with concerned citizens and municipal authorities is useful; having a solution that may reduce operating costs is a bonus.