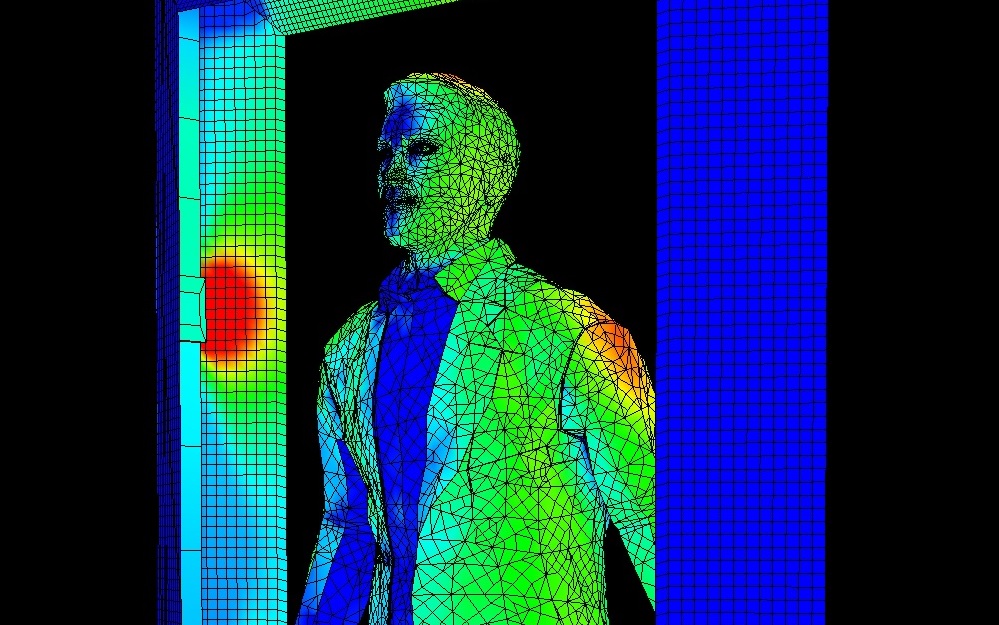 Published 2020/05/29 by the Illuminating Engineering Society as https://www.ies.org/fires/designing-a-uv-c-germicidal-system/.

Germicidal lamps emitting ultraviolet-C (UV-C) radiation have been in use since the 1930s (Wells and Wells 1936). These are most commonly low-pressure mercury-vapor discharge lamps, which are basically fluorescent lamps without a phosphor coating and fused quartz rather than borosilicate glass bulbs. They emit monochromatic radiation mostly at 254 nm, a wavelength that is very effective in disrupting the DNA of viruses, bacteria, and other pathogens.

The photobiological risks of these germicidal lamps are well-known: exposure to UV-C radiation can result in photokeratitis (“snow blindness”), photoconjunctivitis (“pink eye”), and erythema (sunburn). These medical conditions typically only last for a few days, but they can be quite painful. Unlike UV-B radiation (280 nm to 315 nm), UV-C radiation is much less likely to cause long-term cellular damage leading to skin cancer,

More recent germicidal light sources include UV-C light-emitting diodes and pulsed xenon discharge lamps, but there is a newcomer on the block that has gained considerable media attention: far-ultraviolet excimer lamps. Recent medical studies have indicated that, unlike 254 nm radiation, the 207 nm and 222-nm “far-UV” radiation emitted by excimer lamps is likely harmless (e.g., Buonanno et al. 2017, Welch et al. 2018). Excimer lamps have the same germicidal properties as mercury-vapor discharge lamps, but the shorter wavelength radiation cannot penetrate deeply enough into the outermost cells of the eyes and skin to disrupt their DNA.

This leads to the exciting thought that we may be able to design UV-C germicidal systems using far-UV excimer lamps. Unlike mercury-vapor lamps and UV-C LEDs, there does not appear to be any significant photobiological risk (if their residual UV-C emissions are blocked), and so they could be deployed in direct view of the room occupants while disinfecting both the air and contaminated surfaces with their radiation.

Indeed, there are already companies advertising such products, although they do not appear to be commercially available as yet. This does not stop us, however, from asking the question: what does it take to design a UV-C disinfection system using far-UV radiation?

Excimer lamps consist of diatomic molecules that form a plasma when an electrical current passes through them. A combination of krypton and chlorine (KrCl) gases, for example, emits 222-nm radiation, while krypton and bromine emit 207-nm radiation.

Companies such as Ushio and SterilRay manufacture excimer lamps and products for industrial and medical applications, but the lamps are typically comparable to fluorescent lamps in size and form factor (e.g., FIG. 1). However, one company – Eden Park Illumination – has adapted the technology formerly used in plasma television displays to produce thin microplasma lamps intended for general illumination purposes. One of their evaluation products is of particular interest, as it generates nearly monochromatic 222 nm UV-C radiation (FIG. 2).

The published specifications of this product are not particularly remarkable, but they are useful in that they enable us to evaluate the usefulness of this technology for germicidal applications. Eden Park states that they have achieved a maximum irradiance greater than 25 μW/cm2 in the laboratory, but this is presumably with a much shorter lifetime. (The criterion for lifetime is not defined, but presumably refers to UV-C output power depreciation over time.)

A key characteristic of germicidal lamps of any sort is the UV-C radiation dose (irradiance multiplied by exposure time), expressed in millijoules per square centimeter (mJ/cm2). The required dose depends on both the pathogen species to be eliminated and the desired degree of reduction. For example, eliminating 90 percent of Escherichia coli O157:H7, the bacterium that causes sometimes fatal food poisoning, requires 1.5 mJ/cm2; doubling the dose eliminates 99 percent, tripling eliminates 99.9%, and so forth. This is referred to as log10 (“log-ten”), or more commonly “log,” reduction:

The International Ultraviolet Association publishes a compilation of dose requirements for many different pathogens, but viruses on average require a dose of about 20 mJ/cm2 for 90 percent reduction when directly exposed to the UV-C radiation (IUVA undated). Most of the studies referenced in the compilation consider 254 nm radiation from low-pressure mercury vapor lamps, but the required dose from 207-nm and 222-nm excimer lamps should be comparable.

The goal, of course, is to provide sufficient UV-C irradiance that the desired log reduction is achieved within an allotted time. With this in mind, it is useful to calculate the expected irradiance versus distance for the 222-nm microplasma excimer lamp (FIG. 3).

It should be noted that the excimer lamp is an area source, and so the inverse square law does not apply in the near-field, or a distance of less than 10 inches. It was also assumed that the lamp has a Lambertian (i.e., cosine) radiant intensity distribution.

This plot is useful in that the irradiance versus distance values will give us a sanity check for the next phase of the design. For example, if we have a requirement for 90 percent virus reduction in 20 seconds, we would need an irradiance of 1,000 μW/cm2, requiring a distance of less than two inches from the lamp. Even if the lamp produced the maximum reported output of 25 μW/cm2, the maximum distance would still be less than five inches.

A possible design of obvious interest is to place the excimer lamps in the frame of a doorway or entry portal, much like an airport security scanner. Anyone passing through the doorway can – in theory – be disinfected.

In theory … the goal here is not to design a specific disinfection system, but to consider the factors that go into its design. What we learn from this exercise can be used to guide engineering design for commercially-realizable disinfection systems. Conceptually then, we want a system wherein a person walks into the doorway, does a complete 360-degree turn, then continues on after being disinfected by the (presumably) safe 222-nm UV-C radiation.

The doorway shown in Figure 4 has an opening 50 inches wide by 80 inches high. It has four microplasma lamps mounted at 30 inches and 60 inches above the floor, and a fifth lamp mounted overhead. The pseudocolor heat map shows the far-UV irradiance due to these lamps.

It is in general difficult to obtain UV-C reflectance data for most materials. A report published four decades ago summarized the results of studies done between the 1920s and 1940s, but very little information has been published since then (Ullrich and Evans 1976). Still, there is sufficient data available to model the system shown in Figure 3 (Cader and Jankowski 1998 and Nagy 1964):

Given this, we can place a virtual mannequin inside the doorway, rotate it through 90 degrees, and measure the predicted far-UV irradiance at selected target points (FIG. 5). The results are shown in Table 2 and Figure 6.

The design certainly has a few shortcomings, although we could have expected them from Figure 2. If the goal is to achieve a 90% reduction in pathogens (99.9% is preferable), we would need a far-UV dose of 20 mJ/cm2. With a minimum irradiance value of 2.55 μW/cm2, we would need therefore an exposure time of over two hours!

It gets worse, however. The UV-C doses required to achieve a given reduction in pathogens are determined by irradiating cultures in Petri dishes and test tubes. Disinfecting surfaces in the real world typically requires larger – sometimes much larger – doses. Increasing the number of excimer lamps would of course increase the average irradiance, but this approach has its limits. The American Conference of Governmental Industrial Hygienists recommends a maximum exposure of 3.0 mJ/cm2 of broadband (200 nm – 315 nm) ultraviolet radiation per 8-hour workday, and specifies a spectral weighting function to assess ultraviolet hazards for skin and eye (ACGIH 2013). For 222-nm radiation, the weight factor is 0.12, meaning that a maximum exposure of 25 mJ/cm2 is recommended. At 1,000 μW/cm2, a 30-second exposure would exceed the recommended daily limit. This would be a concern not only for the person being irradiated, but also for any service personnel standing near the doorway for extended periods of time.

One issue that will need to be addressed is that krypton-chlorine lamps emit about three percent of their radiation in the region of 230 to 260 nm, as can be seen in Figure 2. There is evidence that far-UV exposure can cause erythema in persons with phototypes I and II skin, and also patients taking photosensitizing drugs (e.g., Woods 2015 and Saadati 2016). This reaction is likely due to the residual UV-C radiation, but it can presumably be blocked by suitably doped fused quartz filters.

There is also a fundamental flaw in this design: the SARS-CoV-2 virus that causes COVID-19 appears to be spread primarily through aerosols generated by coughing, sneezing, and even talking. Even if the doorway disinfection system were capable of properly disinfecting surfaces, it would have no effect on an infected person walking through it.

The unfortunate conclusion is that using microplasma excimer lamps in doorway disinfection systems fails by several orders of magnitude. From an engineering perspective, this is an undesirable outcome. However, we should not be surprised to see such systems in common use in the near future. We have lived with airport security full-body scanners for years. It is widely acknowledged these devices are an example of security theater – the practice of investing in countermeasures intended to provide the feeling of improved security while doing nothing or little to achieve it. Doorway disinfection systems – with the associated annoyance of having to pause for 20 seconds or so before entering a building – may become just as common in our daily lives.

None of the above should be construed as a criticism of far-UV excimer lamps for room disinfection. Based on the evidence to date, they appear to be safer and equally as effective as low-pressure mercury-vapor discharge lamps for upper-room air disinfection and surface disinfection in unoccupied spaces. However, more research is required to determine whether the existing ACGIH dose recommendations for far-UV radiation can be exceeded.