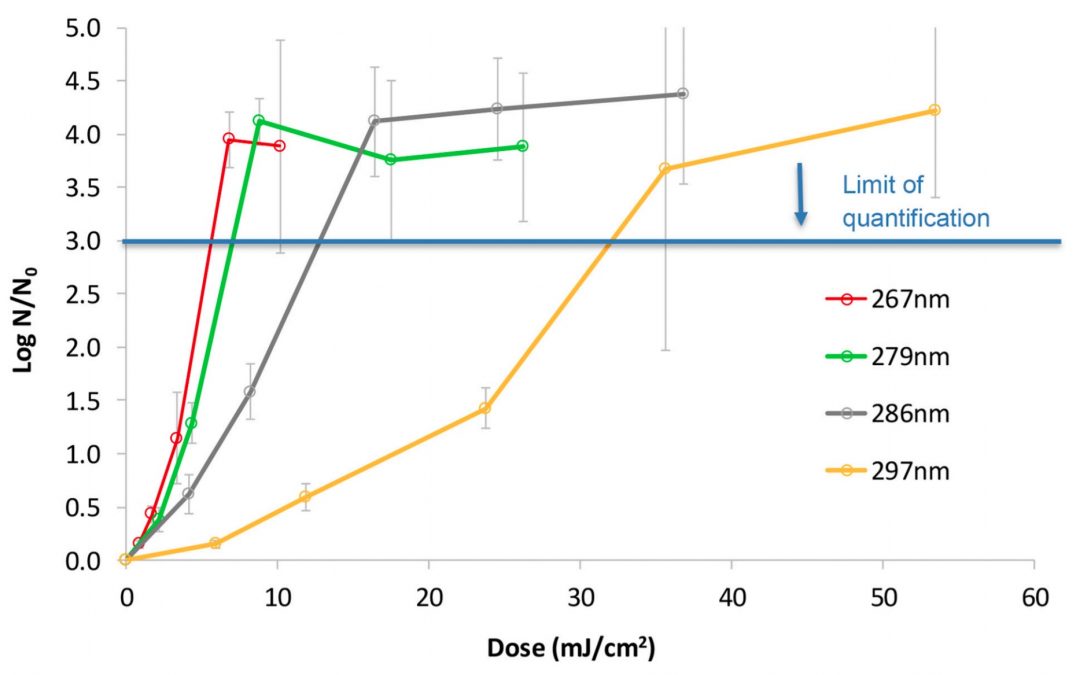 Let me begin with a smorgasbord of headlines:

These are the first half-dozen of over 200 online articles that were over a period of approximately two weeks following the publication of this Tel Aviv University press release, dated December 14, 2020:

“Groundbreaking” research? This has a touch of hyperbole, but let’s see …

On September 10, 2020, the respected Journal of Photochemistry & Photobiology, B: Biology published this paper:

The paper is open-access, for which the publisher deserves due credit for making its COVID-19-related research papers freely available.

The paper’s abstract is interesting:

“UV light-emitting diodes (UV LEDs) are an emerging technology and a UV source for pathogen inactivation, however low UV-LED wavelengths are costly and have low fluence rate. Our results suggest that the sensitivity of human Coronavirus (HCoV-OC43 used as SARS-CoV-2 surrogate) was wavelength dependent with 267 nm ~ 279 nm > 286 nm > 297 nm. Other viruses showed similar results, suggesting UV LED with peak emission at ~286 nm could serve as an effective tool in the fight against human Coronaviruses.”

but the introduction is more informative:

“Numerous studies have examined the sensitivity of different microorganisms (including viruses) to UV LED at different wavelengths as detailed in Table 1, for suspended viruses. However, no study to date has examined the efficiency [sic] of UV LEDs at different wavelengths on the inactivation of the human corona virus. Here, we have used the human coronavirus OC43 (HCoV-OC43) as a surrogate to the SARS-CoV-2, to develop a dose-response curve for UV-LEDs at various wavelengths.”

.. and here we need to pause in order to put these statements into context. The authors referenced twelve previous studies in their Table 1, but the key phrase here is “UV LED.” If we generalize this to “ultraviolet (UV) radiation,” there are many more studies of the relationship between wavelength and the efficacy (not “efficiency”) of UV radiation in inactivating viruses. In fact, the first study was published 144 years ago (Downes and Blunt 1877). The virucidal  action spectrum for UV radiation was first established by Rivers and Gates (1928) and Sturm et al. (1932).

Figure 1 shows the action spectra (DIN and IES) for germicidal ultraviolet radiation applications, such as upper-room air and municipal water disinfection, that have been widely adopted by the CIE, IES, ACGIH, NIOSH, DIN, and other standards organizations:

What is rarely mentioned is that these action spectra are based on laboratory results with the Escherichia coli bacterium (e.g., Gates 1930). It is not a coincidence that the peak response near 265 nm corresponds with the peak spectral absorptance of deoxyribose nucleic acid (DNA) – UV radiation disrupts the genetic code of viruses, bacteria, and fungi, thereby preventing them from reproducing (e.g., Hollaender and Oliphant 1944).

The peak spectral response of different viruses and other pathogens may therefore vary by perhaps five nanometers or so (e.g., Linden 2001). However, the DIN and IES action spectra remain applicable for practical applications of germicidal UV radiation.

… which brings us back to the current paper of Gerchman et al. (2020). The results presented in the paper are summarized in Figure 2, where the dose refers to the UV irradiance multiplied by the exposure time, and the horizontal “limit of quantification” line represents the dose required to achieve log-three (99.9 percent) inactivation of the virus colony:

We may compare this to the IESNA germicidal response curve as enumerated in CIE 155:2003, Ultraviolet Air Disinfection, relative to the peak response at 265 nm:

The error bars shown in Figure 2 represent standard deviations in the results, which the authors explained as “an artifact due to lack of precision in enumerating the low number of [virus] survivors.” It is refreshingly surprising to see such honesty in published results; this sort of information is usually confined to supplementary material so as to not “confuse” the reader with data that might weaken the paper’s conclusions.

Whether there are errors of fact or the authors used questionable experimental procedures is not a topic that I as a science journalist (among other things) am academically qualified to comment on.  What I will say, however, is that the paper itself has been carefully constructed and well-written, and is a model of academic writing.

So far, so good. However, there are no surprises here – the OC43 coronavirus appears to be somewhat less susceptible to longer wavelengths than E. coli bacteria, but this does not invalidate the applicability of germicidal response functions shown in Figure 1. The research is if anything no more than a confirmation of accepted scientific fact – viruses are susceptible to ultraviolet radiation, with a peak response near the DNA peak spectral absorptance of 265 nm.

The question then is, why did the editors of the Journal of Photochemistry & Photobiology decide that the paper was worthy of publication? While it is impossible to speak on behalf of the editors, one answer is that there is often value in the publication of negative results.

If the research had shown that the OC43 coronavirus was highly susceptible to longer wavelengths of UV radiation, that would have been stunning news that would have more than justified publication of the paper. Instead, the study merely confirmed that the existing standard germicidal response curves are generally applicable to HCoV-OC43, and (presumably) to SARS-CoV-2.

The academic value of the paper is therefore in describing what appears to be a carefully designed and executed series of experiments that yielded negative results. It informs other researchers of what has been done, and so allows them to direct their research efforts elsewhere.

There have to date been over 54 thousand academic papers relating to the SARS-CoV-2 virus that have been published in biomedical and life science journals. The probability of any one article coming to the attention of the public is basically infinitesimal … if it were not for university media relations officers.

The role of the media relations officer is to present the often-arcane details of academic research to the public. For both public and private universities, being seen in positive terms by the public is key to obtaining financial support from both public and private institutions. In other words, the role of a media relations officer is that of a marketing professional.

It is often a difficult job – how do you take a paper with a random title such as, “Genetic diversity of the Plasmodium falciparum GTP-cyclohydrolase 1, dihydrofolate reductase and dihydropteroate synthetase genes reveals new insights into sulfadoxine-pyrimethamine antimalarial drug resistance” (DOI:10.1371/journal.pgen.1009268), and present it to a public more interested in YouTube celebrities and sports figures? You begin your press release with a catchy title such as, “New mutations in malaria parasite encourage resistance against key preventative drug,” but the only qualification for the job is usually a bachelor’s degree in journalism. The media relations officer, through misunderstanding their interview with the researcher or lack of knowledge and experience, may fail, sometimes spectacularly.

I have no desire to name and shame the media relation officer at Tel Aviv University in Israel, but I must say something. Here are a few select quotes for the aforementioned press release of December 14th, 2020:

“Researchers from Tel Aviv University have proven that the coronavirus can be killed efficiently, quickly and cheaply using ultraviolet (UV) light-emitting diodes (UV-LEDs). This is the first study in the world conducted on the disinfection efficiency of a virus from the family of coronaviruses using UV-LED irradiation at different wavelengths or frequencies.”

This may be technically true, but the significance of this study is grossly overrated in calling it, “the first study in the world.”

It does not take a mathematician to understand that a relative efficacy of 46 ± 5 percent is not “almost as efficient.”

“The entire world is currently looking for effective solutions to disinfect the coronavirus … The disinfection systems based on LED bulbs, however, can be installed in the ventilation system and air conditioner, for example, and sterilize the air sucked in and then emitted into the room.”

This is true, but it has nothing to do with the research paper. The popular press has been awash with stories about germicidal disinfection using radiation, a technology that has been in commercial use since 1909 (von Recklinghausen 1914). Economics currently favour low-pressure mercury vapour lamps that emit ultraviolet-C radiation at 254 nm, but rapid progress is being made in the development of more efficient and inexpensive ultraviolet LEDs. Again, nothing to do with this paper.

Quoting one of the paper’s authors from the press release, “We discovered that it is quite simple to kill the coronavirus using LED bulbs that radiate ultraviolet light, but no less important, we killed the viruses using cheaper and more readily available LED bulbs, which consume little energy and do not contain mercury like regular bulbs.”

This is … painful. Even if the author meant specifically the OC43 coronavirus and ultraviolet radiation generated by light-emitting diodes rather than mercury-vapour lamps, stating that anything was “discovered” is simply ludicrous.

It should further be noted that the radiant efficacy of commercially-available 285 nm UV-LEDs is currently on the order of one percent. This may be compared to that of mercury-vapour lamps, with efficacies on the order of 40 percent. The advantage of UV-LEDs is that it is much easier to direct their emitted radiation into narrow beams, a requirement for upper-room air disinfection devices.

“Last year, a team of researchers led by Prof. Mamane and Prof. Gerchman patented a combination of different UV frequencies that cause dual-system damage to the genetic load and proteins of bacteria and viruses, from which they cannot recover – which is a key factor that is ignored.”

This is one of those, “Wait, what?” moments, where an entirely different and much more relevant press release could have been written about this technology. The patent application in question is US Patent Application 20200255305, “Method and Device for Water Disinfection,” that uses two sources to simultaneously emit UV-C and UV-B radiation. Patent applications are not peer-reviewed, however, and so the information needs independent verification and much more detail concerning the experiments behind the invention.

The primary problem is that the media relations officer was clearly struggling to understand the issues and write a coherent and informative press release. At best, there appears to have been “a failure to communicate.”

Whatever misinformation and confusion there may have been in the press release, it won the lottery in being selected by the mass media for amplification. Looking at only the first six of some 200 article titles:

No, neither the paper nor the press release made any claims regarding the SARS-CoV-2 virus that causes the COVID-19 disease. It explicitly stated that the HCoV-OC43 virus (which is one of the many viruses responsible for the common cold) was chosen as a surrogate for the SARS-CoV-2 virus, and that “… our future work will confirm these results by testing the impact of LEDs and their combinations on SARS-CoV-2.”

“You can kill Covid with a flick of a switch, study shows.”

The paper never suggested such an outlandish idea. It instead focused on the relative dose of ultraviolet radiation at different wavelengths to inactivate (not “kill”) a particular virus. The irradiance levels employed in the experiments would be totally impractical for surface disinfection in the real world.

The paper uses the noun “seconds” just once, referring to “… up to 60 s for 267 and 279 nm and up to 90 s for 286 and 297 nm.” The key metric is dose – ultraviolet irradiance multiplied by exposure time. Whoever wrote this headline simply invented the number as clickbait.

… and so it goes, like some sinister version of the children’s game Chinese whispers. Perfectly reasonable and valid scientific information is endlessly repeated and distorted from paper to press release to mass media articles. Like most such events, the story will have a half-life measured in weeks to a few months before it is forgotten. Unfortunately, the misinformation spreads like a virus, mutating at each step of transmission while driven by the need for favorable press coverage and website advertising revenue … and we are all the poorer for it.