The Effect of Near-Infrared Radiation on Plants 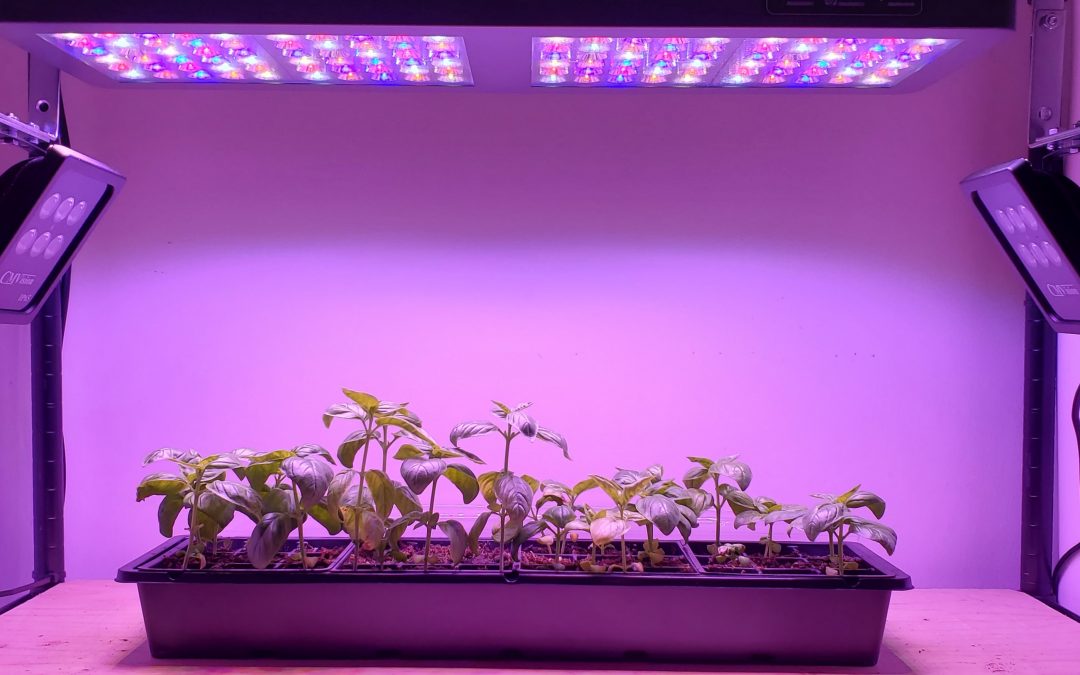 Look at any textbook on botany and you will find this maxim: plants respond to optical radiation in the spectral range of 280 nm to 800 nm. Period, end of discussion. The question is, how was this spectral range (sometimes referred to as Photobiologically Active Radiation, or PBAR) determined?

This question addresses issues beyond mere academic curiosity. Recent studies, both in the laboratory and in the field, have shown that ultraviolet-C radiation – optical radiation with wavelengths shorter than 280 nm – offers significant economic benefits for horticultural applications. The effects and potential economic benefits of near-infrared radiation – optical radiation with wavelengths longer than 800 nm – have yet to be explored.

The reason for choosing 280 nm as the lower limit of PBAR is simple: plants in the wild are simply not exposed to ultraviolet-C radiation. As shown by the terrestrial solar spectrum in Figure 1, the atmospheric ozone layer effectively blocks any significant amount of ultraviolet-C radiation (100 nm to 280 nm) from reaching the Earth’s surface.

The logic of excluding UV-C radiation from the definition of PBAR may be sound, but it has had unintentional consequences. We have had the ability to produce UV-C radiation for ultraviolet germicidal irradiation (UVGI) applications for over a century (e.g., Kowalski 2009), and low-pressure mercury vapor lamps generating 254 nm UV-C radiation have been used in hospitals and food processing facilities for disinfection purposes since the 1930s. However, it has only been in the past decade or so that UV-C irradiation (mostly using 254 nm UV-C lamps) has been studied and commercialized for pre- and post-harvesting applications in horticulture (e.g., Aarrout et al. 2020, Urban et al. 2016).

The use of UV-C radiation in commercial horticultural applications, including in open fields, greenhouses, and enclosed vertical farms, is proving to have important economic benefits in terms of plant health and reducing spoilage post-harvest. This therefore begs the question: by excluding near-infrared radiation (NIR) from the definition of PBAR, what (if anything) are we missing?

Far-red and the Phytochromes

The Pfr isoform regulates physiological changes in plants, and so it represents the biologically active form of phytochrome. It is, in other words, a biological switch. The relative concentration of Pr to Pfr will depend on the ratio of red to far-red light (expressed as R:FR) incident upon the plant leaves, and the plant will respond accordingly (although often in a species-specific manner).

The spectral absorptances of Pr and Pfr were measured in vitro by Butler et al. (1964), Gardner and Graceffo (1982), and Sager et al. (1988), with moderately similar results. Today, the high-resolution (2 nm) dataset of Sager et al. is most commonly referenced.

This would not appear to be a serious issue, however, as the spectral absorptances of both Pr and Pfr clearly do not extend significantly beyond 800 nm … so why bother looking?

A review of the academic literature identified only three papers that considered the effect of NIR on plants. Flint and McAlister (1936) studied the effect of different spectral bands on the inhibition of lettuce seed germination, but it is unclear from their paper what data points were used to generate the plot shown in Figure 3. (The spectral bandwidth was approximately 20 nm.) Even if the small circles represent five peak wavelengths, however, the inhibition of 80 percent at 800 nm is contrary to the Pfr spectral absorptance at this wavelength.

From a horticultural perspective, these are curious but not particularly useful effects of NIR on cereal grasses grown in darkness. These studies leave the question of whether NIR has any effect on higher plants grown under electric lighting unanswered.

What is surprising about this question is that we should already have answers for any plant species grown in greenhouses versus the same species grown under LED lighting in vertical farms. Most greenhouse glazing is either soda-lime glass with almost constant spectral transmittance from 350 nm to 2800 nm (Figure 5), or polycarbonate panels with constant spectral transmittance from 390 nm to 1100 nm. Referring to Figure 1, the relative radiant power of the solar spectrum from 800 nm to 900 nm is 19 percent of that from 400 nm to 800 nm. The greenhouse glazing has only minimal impact on the spectral power distribution of visible light and NIR (and hence the R:FR ratio) inside the greenhouse.

In practice, however, it would be difficult to conduct experiments comparing the effects of daylight versus electric lighting. It would, for example, be necessary to match both the photosynthetic photon flux density (PPFD) and the spectral power distribution of daylight at the plant canopy. In addition, the inherent variability of daylight and consequent changes in PPFD would further complicate the experiments.

The first experiment consisted of growing petunias (Petunia x hybrida) from seed in peat moss at 20° C. The seeds sprouted in seven days under diffuse daylight before being transferred to the growth rack (Figure 7). One group of seedlings was additionally irradiated with 850 nm NIR radiation from a 4-watt Tendelux AI4 IR Illuminator with a 90-degree beam spread and an integral infrared bandpass filter. The grow light was operated with a photoperiod of 12 hours, while the NIR source was energized continuously.

A near-infrared spectroradiometer was not available to measure the spectral power distribution between 800 nm and 900 nm. However, measurements with the visible light spectroradiometer showed that any residual emission from the 850 nm LEDs below 800 nm was less than 0.3 percent of the VIPARSPECTRA peak emission.

The seedlings grown under NIR appeared to develop more quickly, but the growth rate equalized as the leaves matured after seven weeks, However, the mature leaves (8 weeks) grown under NIR were noticeably darker, suggesting a greater concentration of chlorophyll.

The most noticeable morphological difference was that the plants grown under NIR were considerably more compact (Figure 8).

The second experiment consisted of growing sweet basil (Ocimum basilicum v. ‘Sweet Genovese’) from seed in potting soil at 20° C. Two groups were grown under separate VIPARSPECTRA grow light systems, with one group irradiated by two 18-watt CMVision CM-IRP6-850 IR illuminators with a 90-degree beam spread (Figure 9). Measurements with the visible light spectroradiometer again showed that any residual emission from the 850 nm LEDs below 800 nm was less than 0.3 percent of the VIPARSPECTRA peak emission. (The VIPARSPECTRA grow light system for the seedlings without NIR had an R:FR ratio of 7.14.)

The VIPARSPECTA grow lights were operated with a photoperiod of 12 hours, while the CMVision NIR sources were energized continuously.

Due to the lack of quantitative spectral power distributions for the NIR irradiation of the plant canopy and the differences in NIR irradiance between the two experiments, the results observed above must be considered incomplete pending further study. However, a number of tentative conclusions can be drawn regarding constant 850 nm irradiation:

One possible explanation for these observations is that the biologically active isoform of phytochrome (Pfr) has an unreported spectral absorption band in the region of 800 nm to 900 nm. This would have the effect of reducing the Pfr content in the leaves, which in turn reduces the chlorophyll concentration (e.g., Kreslavski et al. 2018) and increases the leaf area (e.g., Boccalandro et al. 2009). This could explain the Ocimum basilicum results, but not the Petunia x hybrida results.

The shade avoidance response of Ocimum basilicum can also be explained by NIR absorption, as this is equivalent to lowering the R:FR ratio. The plant stems will then elongate in order for the upper leaves to receive as much full sunlight as possible.

This does not, however, explain the apparent antagonism of the shade avoidance response of Petunia x hybrida. One possibility is that the lower NIR irradiance used in the experiment elicits a nonlinear response by phytochrome Pfr, although this would be more likely to have a null rather than a negative effect.

Whatever the case, it is evident that more research is required. The PBAR limit of 800 nm has been assumed for at least the past seven decades, but then the effects of UV-C radiation on plants remained unexplored for an equal length of time. The effect of near-infrared radiation of plants is a topic that deserves to be explored.