Far-Red Lighting and the Phytochromes 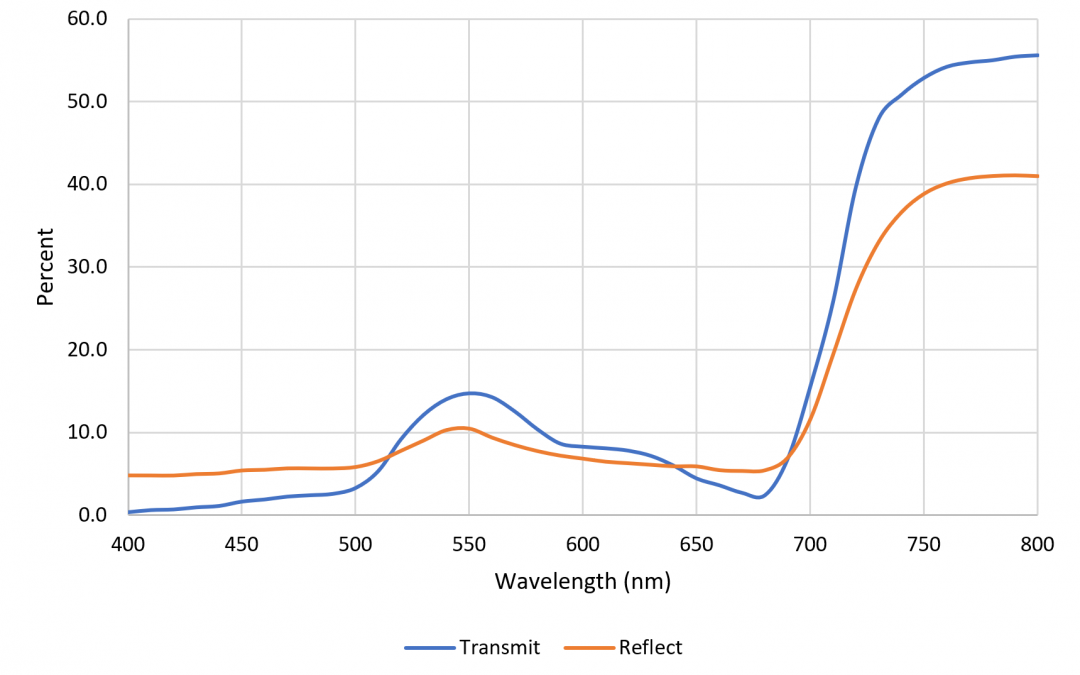 Most LED grow lights feature blue and red LEDs whose peak wavelengths – approximately 450 nm for blue and 660 nm for red ­– have been chosen to coincide with the spectral absorption peaks of chlorophyll A and B molecules. In doing so, they optimize the conversion of electrical energy into plant photosynthesis.

Some manufacturers, however, are now offering grow lights with “far-red” LEDs that feature peak wavelengths of approximately 735 nm. Unfortunately, they offer little if any information on why these LEDs are useful.

In order to make an informed choice when purchasing these grow lights, it is necessary to understand some of the science behind far-red radiation and how plants perceive and respond to it.

What we call “visible light” is electromagnetic radiation with wavelengths ranging from 400 to 700 nanometers (nm). We perceive this radiation as ranging from very deep blue (400 nm), bordering on ultraviolet radiation, to very deep red (700 nm), bordering on infrared radiation. Coincidentally, this is also the range of wavelengths that plants can utilize for photosynthesis (PAR = Photosynthetically Active Radiation).

There is no formal definition of “red” in terms of wavelength, but it is often considered to consist of wavelengths ranging from 600 nm (bordering on orange) to 700 nm. The term “far-red,” on the other hand, has been formally defined to consist of wavelengths between 700 nm and 800 nm. We can barely see this radiation as a very deep red if the radiation is intense enough, but it is for practical purposes invisible to the human eye. Plants, on the other hand, readily perceive and respond to far-red radiation.

We see vegetation as being green because the chlorophyll A and B molecules strongly absorb blue and red light. A typical green leaf absorbs 90 percent of incident red light; the remainder is reflected and transmitted (FIG. 1). Beyond 700 nm, however, chlorophyll is basically transparent. This means that beyond approximately 750 nm, green vegetation reflects 40 percent and transmits 55 percent of far-red radiation. The region of rapid change in spectral reflectance between 700 and 750 nm is called the “red edge,” and is used to monitor vegetation coverage from space using remote imaging.

Angiosperms – flowering plants – also take advantage of the red edge using a family of photoreceptor molecules called phytochromes (Latin for “plant color”). They have been doing so since they first appeared in the fossil record some 160 million years ago. It is not an exaggeration to say that without these molecules, we would still be living in a world of conifers, cycads, and ginkgoes.

The number of different phytochromes varies by plant species – rice has three, thale cress (Arabidopsis thalania) has five, maize has six, and so on. Each type serves different (and often multiple) functions in each species, but they all absorb red and far-red light in exactly the same manner.

Each phytochrome molecule has two states called isoforms. Left in the dark for several hours, it reverts to a state called Pr, where it strongly absorbs red light (FIG. 2). If a phytochrome molecule in this state absorbs a red photon, it changes to its Pfr state, where it absorbs far-red radiation. If the molecule absorbs a far-red photon, it reverts back to its Pr state. When in its Pfr state, the molecule is biologically active, and may interact with the plant’s molecular machinery. Given this, phytochrome can be seen as a reversible biological switch that can enable or inhibit various plant functions. One such important function is the detection of neighboring plants.

Flowering plants that tolerate full or partial sun need to gain access for their leaves to direct sunlight in order to photosynthesize. The problem is that they often have competition from other plants for the same resource. That is, the leaves of other plants may block access, either at present or in the future. In response, the plant may elongate its stem (apical dominance) and decrease branching in order to tower above the competition. In doing so, it necessarily diverts resources from other priorities, including producing secondary metabolites for pathogen resistance and insect herbivore deterrence, improving drought tolerance, and reducing root biomass. Together, these responses are called the shade-avoidance syndrome (SAS).

If the plant realizes or predicts that it cannot avoid being shaded, it responds by growing in a more compact form and flowering early. Being crowded by other plants, it is more susceptible to pathogen and herbivore predation. The best strategy is therefore to build chemical and defenses and stay close to the ground while producing seeds as soon as possible in order to survive into the next generation.

Shade-loving flowering plants, on the other hand, may not exhibit any of the SAS responses, at least to the same degree. The daylight they receive has likely been diffused by the forest canopy, and so there is less advantage in devoting resources to avoid being blocked by the leaves of neighboring plants.

On a clear day, direct sunlight has a ratio of red light to far-red radiation (R:FR) of about 1.3. That is, there is about 30 percent more red light than far-red radiation that is received by the plant leaves. Even daylight reflected from natural inorganic materials such as rock and soil exhibits roughly the same R:FR ratio.

When the direct sunlight is being blocked by the leaves of neighboring plants, however, the “red edge” effect takes hold. A single layer of leaves can change the R:FR ratio from 1.3 to 0.2 or less. That is, there is now about six times less red light than far-red radiation incident on the plant leaves. Two layers of leaves and the difference becomes thirty times or more.

The R:FR ratio of direct sunlight is about 1.3 during most of the day, but it approaches 0.6 or so during twilight when the atmosphere preferentially scatters blue light and the sky turns yellow and red. This only lasts for half an hour or less, but it is important because plants use these changes to synchronize their internal circadian clocks both with the 24-hour day and the seasons. This involves a burst of gene expression activity that is controlled by phytochrome.

Blackout curtains can be used in greenhouses to eliminate twilight, and both red and far-red LEDs can be used to simulate twilight for vertical farms at the end of the daily photoperiod. Interestingly, low PAR values are required, on the order of one µmol·m-2·sec-1, for this purpose. Various SAS responses to red and far-red pulses have been recorded for different species, including stem elongation and changes in leaf area. End-of-day pulses of far-red radiation, for example, have been shown to result in useful hypocotyl elongation of tomato rootstocks for grafting.

Floriculturists have long used incandescent lighting at night to disrupt the photoperiod of short-day plants such as poinsettias and chrysanthemums. During the night, the phytochrome molecules revert to their biologically inactive Pr state. If the plants are exposed to incandescent lighting (which has an R:FR ratio of 0.7) during the night, the phytochrome molecules are re-activated, which results in their circadian clocks being reset. Repeated nightly exposure (“night breaks”) in the middle of the night prevents the plants from stopping vegetative growth and setting their flower buds.

For long-day plants, night break lighting may have the opposite effect of advancing rather than delaying flowering. The operative here is “may,” as different species and even cultivars respond differently to night breaks.

It is important to note that only red light can be used for night breaks; when phytochrome is in its Pr state, it cannot absorb far-red photons. Red LEDs with their 660 nm peak wavelengths are thus ideal for night break lighting, whereas far-red LEDs will have no effect (FIG. 2).

Given that plants are subjected to an R:FR ratio of 1.3 in direct sunlight and much lower ratios when shaded by neighbouring plants, it is interesting to consider what we subject them to with various electric light sources. Incandescent lamps have an R:FR ratio of 0.7, which is what plants would perceive when they are adjacent to neighboring plants but not directly shaded.

The common reason for these high R:FR ratios is that, putting aside technology limitations, the lamps are designed for visual applications – there is no reason for them to generate invisible far-red radiation. If they did, it would simply lower their luminous efficacy (lumens per electrical watt) values.

With only blue and red LEDs, the R:FR ratio is essentially infinite. SAS responses can sometimes be elicited by blue light alone, but the likelihood is that many plants will not recognize the presence of neighboring competitors when irradiated by most grow lights.

This leaves open many questions regarding the possible applications of far-red LEDs. While various species and cultivars may grow well (or not) under the familiar blue and red (“blurple”) LEDs, they may not exhibit any shade avoidance syndrome responses. In some situations, these responses may actually be desirable. For instances, sun-loving plants that are grown in shade may be more compact, but they may also exhibit greater pathogen and drought resistance, and they may generate desirable secondary metabolites as defense mechanisms. Their flowering may be advanced or delayed, the number of buds may change … the list goes on.

It is also possible that end-of-day far-red pulses of radiation at low irradiance levels may have a greater effect on plant growth than during the day, as this is when gene expression is particularly active. (Blue light pulses at dawn have also been shown to change plant morphology.) One advantage is that this requires less energy than having the far-red LEDs continuously on during the day.

For horticulturalists and floriculturists, experimentation with far-red LEDs offers opportunities for developing species- and cultivar-specific light recipes as trade secrets. If horticultural luminaire manufacturers have not yet said why far-red LEDs are useful, it is because there is much that still needs to be researched and discovered. With a basic knowledge of the science behind far-red radiation and the phytochromes, it becomes practical to experiment with light recipes and photoperiods, and to understand why the plants respond the way they do.