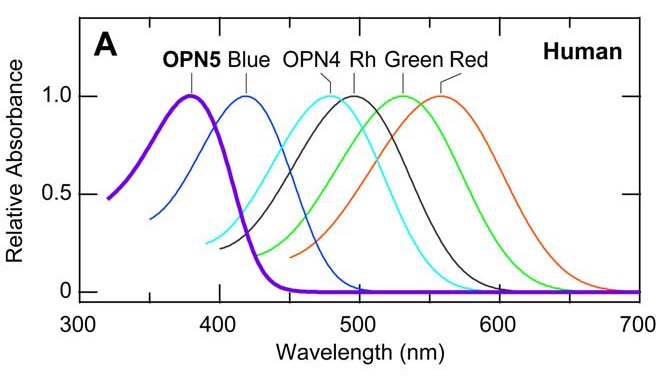 UPDATE 15/11/08 – The following text briefly notes that some people can see near-ultraviolet radiation following cataract surgery due to the UV transmittance of their artificial intraocular lens. An example of this is reported in considerable detail here.

What does it mean to “see?” The word is ubiquitous in the English language, with dozens of different meanings. However, according to the Oxford English Dictionary, the most common definition is to “perceive with the eyes.” It is so common, in fact, that it ranks as one of the thousand most frequently used words in English.

Ultraviolet radiation offers both benefits and dangers to human health. UV-B radiation, for example, induces the production of vitamin D in exposed skin. This essential vitamin helps regulate bone health, and debatably provides other health benefits. Both UV-B and UV-A radiation promote the formation of melanin in the skin, which in addition to causing the skin to visibly tan, protects the skin cells from UV-B radiation damage.

The dangers of ultraviolet radiation include skin damage (sunburn and possible skin cancer through both direct and indirect DNA damage), and eye damage. Short-term exposure to UV-C (present in welders’ electric arcs) and UV-B (present in direct sunlight) can cause photokeratitis (“snow blindness” — basically sunburnt cornea), while long-term cumulative exposure can lead to the formation of cataracts in the lens of the eye and other eye diseases.

Given these dangers, it should come as no surprise that we cannot see ultraviolet radiation. The lens of the human eye is opaque to UV-A radiation, while the cornea blocks UV-B and UV-C radiation (FIG. 2). (Cataract removal operations involve the replacement of the lens with an artificial intraocular lens. These lenses were originally made from molded PMMA plastic, which were transparent to UV-A radiation. As a result, some patients could subsequently perceive ultraviolet radiation.)

We may not be able to see ultraviolet radiation, but other animals certainly can. Wild mice, for example, can see both UV-A and UV-B radiation (Kojima 2011). Other animals include birds, reptiles, fish, insects, and crustaceans, which use their ultraviolet vision for identifying food, sex recognition, and celestial navigation. Many nocturnal insects, for example, navigate by the ultraviolet emissions of celestial objects, and so are disoriented by and attracted to ultraviolet “bug zapper” traps.

We know that our eyes perceive more than just visual images projected onto the rods and cones of the retina. In addition to an estimated 4.5 million cone cells and 90 million rod cells (Curcio et al. 1990), there are also some 3,000 intrinsically photosensitive retinal ganglion cells (ipRGCs) in the retina (Dacey et al. 2005). The high density of cones and rods is necessary to form visual images; the ipRGCs need only detect light.

Lighting designers familiar with circadian-based lighting (e.g., Roos 2015) will recognize ipRGCs. These cells contain melanopsin, which is most sensitive to cyan light with a peak at 490 nm. Upon activation, the cells send electrical signals to the suprachiasmatic nucleus (SCN), a tiny region of some 20,000 cells located in the hypothalamus of the brain. The SCN is the master clock which controls our circadian rhythms.

Melanopsin (OPN4) is but one of a thousand or so known opsins, a group of light-sensitive proteins that occur in prokaryotes (single-celled organisms), some algae, and all animals (Terakita 2005, Shichida et al. 2009). Of particular interest are the “vertebrate visual opsins” that occur in human retinas:

Rhodopsin provides us with scotopic vision, while the three “cone opsins” provide us with photopic color vision.

There are also other opsins in the human body, including OPN3 (encephalopsin), which is found mostly in the brain (Blackshaw et al. 1999), and OPN5 (neuropsin), which is found in the neural tissues of both humans and mice (Tarttelin et al. 2003, Kojima et al. 2011). Being photosensitive, their functions have been hypothesized to be related to the entrainment of our circadian and/or seasonal clocks in some manner, but the mechanisms are unknown.

Neuropsin is mostly sensitive to UV-A radiation, with peak sensitivity at 380 nm. When it absorbs ultraviolet photons, it converts into a blue-absorbing photoproduct with maximum absorption at 470 nm, which is stable in the dark. Orange illumination then converts it back into its ultraviolet-absorbing state (Kojima et al. 2011). It is present (“expressed”) in the retinal neurons of mice, which makes sense — they can see ultraviolet radiation (FIG. 4). However, it has also been found to be present in the cornea of the mouse eye, and presumably is also present in the cornea of the human eye (Buhr et al. 2015). What is it doing there?

(It should be noted that mouse and human opsins are not chemically identical, but rather are orthologs that evolved from common ancestors (Terakita 2005). Human blue opsin and mouse UV opsin, for example, evolved from a common ancestor but have different spectral responses. For neuropsin, however, it is assumed that they are biologically equivalent.)

When we refer to the “circadian clock” in our bodies, we must remember that it is not a single mechanism located somewhere in our brain, but a holistic component of our entire body (Albrecht 2012). We have literally trillions of cells in our bodies, each of which (with a few rare exceptions) has a cellular clock to determine when to use energy, when to rest, when to repair or replicate DNA, and so on. This all happens on the molecular level of proteins and gene expression, with the SCN serving as the master timekeeper for the body, in part by instructing the pineal gland to secrete the hormone melatonin while we are sleeping.

The retina of the human eye has its own local circadian clock that is not synchronized with signals from the SCN (Storch et al. 2007). One of the more curious functions of this clock is to control the electrical coupling between the rods and cones (Ribelayga et al. 2008). Our rods are sensitive to dim light, while our cones are sensitive to bright light, giving us scotopic and photopic vision respectively. During the day, the electrical coupling between adjacent rods and cones is weak, which means that they operate independently in forming visual images. At night, however, the electrical coupling becomes remarkably robust. As a result, the cone circuitry is able to receive signals from the rods under low light-level conditions; this presumably facilitates the detection of large dim objects at night.

How the retinal circadian clock was entrained by the day-night cycle remained unknown until recently, when it was shown that entrainment was due to the presence of neuropsin in the mammalian retina and cornea (Buhr et al. 2015). Surprisingly, none of the other retinal opsins appear to be involved.

Kojima et al. (2011) noted that even if neuropsin is present in the human retina, there does not appear to be sufficient retinal irradiance to activate it. Our lenses are basically opaque to ultraviolet radiation, and even our sensitivity to violet light drops significantly as we age and our lenses turn progressively yellow (Fig. 5).

(As noted by Turner et al. (2008), ipRGCs play a vital role in human physiology and health. As the lens transmittance in the blue and violet region of the visible spectrum decreases with age, we become increasingly susceptible to insomnia, depression, cognitive decline, and numerous systemic disorders due to the lack of circadian rhythm entrainment.)

These results notwithstanding, Buhr et al. (2015) reported that a breed of laboratory mice lacking rods, cones, and ipRGCs were still able to synchronize their retinal circadian rhythms to light/dark cycles, presumably by means of neuropsin in their retinas. Conducting their experiments ex vivo with fresh and cultured tissues, they conclusively demonstrated that OPN1SW (blue opsin) and OPN3 (encephalopsin) were not involved.

What they did not discuss is that Kojima et al. (2011) identified the epidermal and muscle cells of the outer ears as major sites of neuropsin expression in mice. Given that mouse ears typically have few hairs on their surfaces, it was hypothesized that the outer ears may perceive UV-A radiation (but it noted that further studies are required). Thus, while Buhr et al. (2015) demonstrated the role of ocular neuropsin in retinal circadian entrainment, it is not yet clear whether it is solely responsible for entrainment in vivo.

Contradicting Kojima et al. (2011), Buhr et al. (2015) surmised that even in humans with essentially UV-opaque lenses, there may be enough retinal irradiance in blue light to activate the retinal neuropsin when the eyes are exposed to full sunlight. This is possible but unlikely — it implies a presumably important biological function that relies on marginal signaling conditions. (Turner et al. 2008 note that the threshold for circadian rhythm entrainment via melanopsin appears to require daylight illuminance levels, especially for the elderly. The human lens and cornea, however, are mostly transparent to cyan light.)

The presence of neuropsin in the cornea is equally puzzling. Buhr et al. (2015) again surmised that it may involve an ocular (i.e., not just retinal) photoentrainment that is separate from SCN entrainment. However, the corneal cells which host this opsin are not as yet known, nor are the biochemical details of how it functions in vivo.

So what is neuropsin doing in the cornea? It is photosensitive, but then it is also found in the brain, where it has an unknown role. On the other hand, by being present in the human cornea, it is fully exposed to UV-A radiation. This suggests that it is involved in ocular photoentrainment.

Regardless of these unknowns, it is evident that the retinal circadian clock is dependent on neuropsin, and that it involves UV-A radiation rather than visible light. Ergo, we most likely perceive ultraviolet radiation.

From a human-centric lighting perspective then, this raises an interesting question: do we need exposure to ultraviolet radiation in order to maintain the health and nighttime performance of our eyes? Fluorescent lamps emit a small but significant amount of ultraviolet radiation, with eight hours of exposure at interior illumination levels roughly equivalent to one minute of direct sunlight exposure (NEMA 1999). However, LED lamps and modules emit no ultraviolet whatsoever. Whether this will affect, for example, long-term care patients who do not have daily access to sunlight or other near-ultraviolet radiation sources is an open question.

Yet another hypothesis — more research is required.