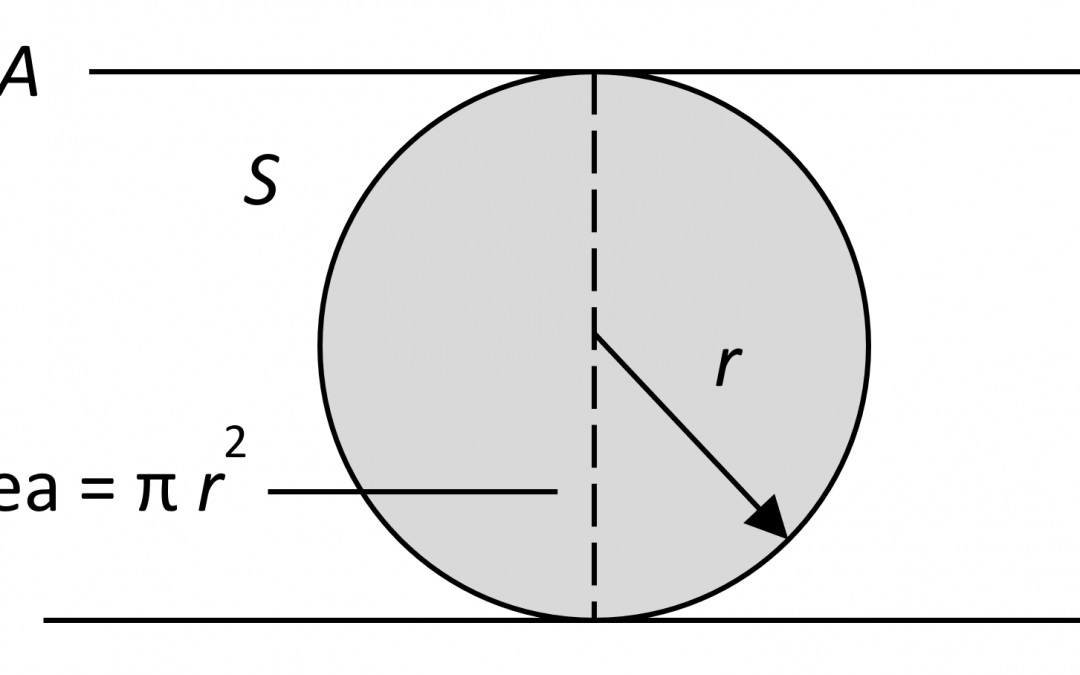 Lighting designers will be familiar with the illuminance of a planar surface, which is measured in lumens per square meter (or foot). The irradiance of a planar surface by a germicidal radiation source is conceptually the same, except that it is measured in watts per square meter (W/m2). Most designers, however, will not be familiar with the concept of the spherical irradiance (or equivalently, fluence rate) of a point in space. This is an essential metric for air disinfection by germicidal lamps, and so it needs to be understood.

Figure 1 shows a parallel beam of UV radiation A with a cross-sectional power density of ΦA watts of power (flux) per square meter (W/m2) irradiating a surface oriented perpendicular to the beam. The beam can be made infinitesimally narrow, thereby irradiating a point on the surface, with irradiance EA = ΦA W/m2.

Irradiance is an appropriate metric for pathogens cultured on a plate, but aerosols are miniscule droplets of water suspended in air. If these droplets have been expelled by someone with an infectious respiratory disease such as tuberculosis or influenza, they may contain bacteria or viruses. These pathogens can be inactivated by UV radiation, but there is no planar surface that is being irradiated, and so the concept of irradiance does not apply.

Figure 2 represents the droplet as a transparent sphere S that does not absorb or refract UV radiation. The sphere has radius r, and so has a cross-sectional area π r2. If this sphere is irradiated by a beam A with cross-sectional power density ΦA W/m2, its irradiance is the same as the beam power density (again typically measured in µW/cm2). The diameter of the sphere can be made infinitesimally small, yielding an elementary sphere – a point in space – while the irradiance remains constant.

Finally, the term germicidal dose applies to both the irradiance of surfaces and the spherical irradiance of aerosols, but the terms fluence and fluence rate apply only to aerosols.

The concept of spherical irradiance may be simple to understand, but only if you ignore the official definitions. The CIE International Lighting Vocabulary has taken the approach that more is better, offering a choice of:

In other words, spherical irradiance (or fluence rate) and fluence with different spectral weightings such as V(λ) for luminous quantities and photobiological action spectra, including photon quantities for horticultural applications.

Trying to understand the CIE definition of fluence rate can be a challenge:

Quantity defined by the formula:

where dΩ is the solid angle of each elementary beam passing through the given point and Le its radiance at that point.

ANSI/IES RP-16-17, Nomenclature and Definitions, on the other hand, is decidedly more spartan:

In addition to being spartan, the IES definitions are both clear and concise:

Fluence rate: The omnidirectional radiant flux externally incident on an elementary sphere about the point, per cross-sectional area of the sphere.

Fluence: The omnidirectional radiant energy externally incident on an elementary sphere about the point, per cross-sectional area of the sphere.

The advantage of these definitions is that they make no mention of radiance or solid angles.

This leads to the obvious question: how do you measure spherical irradiance?

One approach is to use a spherical actinometer, an instrument that consist of a hollow quartz sphere measuring a centimeter or so in diameter that is filled with a solution of ferrioxalate, persulfate, or iodide/iodate; their transmittance after exposure is linearly proportional to the UV-C fluence (e.g., Kowalski 2009).

Another option is to use a radiometer with a “scalar irradiance” (yet another synonym for fluence rate) collector and a narrowband ultraviolet filter, such as the AMOUR radiometer manufactured by Biospherical Instruments (San Diego, CA). However, such an instrument has a “blind spot” of approximately 80 degrees where the spherical Teflon collector is mounted on its connector shaft.

UPDATE 20/08/28 – The manufacturer has stated that their AMOUR radiometer is not capable of measuring UV-C radiation due to excess absorption by the Teflon collector.

It may be difficult to measure spherical irradiance, but it is possible to predict its three-dimensional distribution in space using modified lighting design and analysis software, including contributions of direct radiation from UV-C sources and interreflections from surfaces. However, as Pierre de Fermat said regarding his Last Theorem, “I have discovered a truly remarkable theorem … which this margin is too small to contain.” More details to follow …

Thanks to Dawn DeGrazio of the Illuminating Engineering Society for her review and comments.